Comments:  The 1872 Cafe is part of the the Voters Block Community project which includes new construction and  rehabilitation of buildings, including mixed use buildings in the Susan B. Anthony and near Southwest neighborhoods.  The 1872 Cafe at 431 W. Main Street will eventually be overlooking the Voters Box Memorial, the focus of the park to the NW of the Cafe Where Susan B. Anthony illegally voted in 1872.  The cafe originally opened on August 18, 2012 in commemoration of the 92nd anniversary of the 19th Amendment and was sponsored by Spiritus Chisti Church.

The cafe closed on March 15, 2015 but reopened August 18, 2015 under the ownership of Sam Fantauzzo.   They now also serve thin-crust pizza and donuts from Donuts Delight.

Looking east along along W. Main Street we see the 1872 Cafe which arcs around the park which will be the site of the Voters Box Memorial.  To the south of the Cafe on the far right are some of the apartments which are part of the Voters Block project. 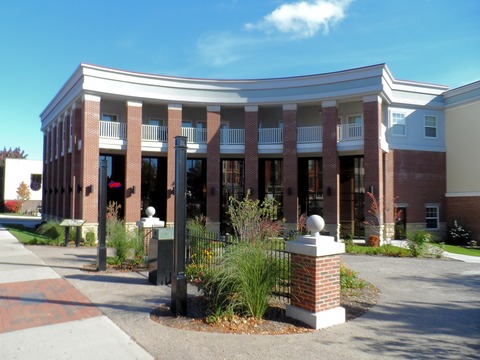 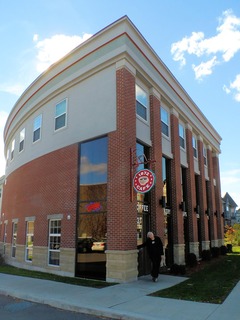 Marian and I tried out the 1872 Cafe for a late lunch and enjoyed the experience very much.

As you enter from the north east entrance you see the order counter counter with a display case of goodies on the left and the seating area facing Main Street and the memorial park on the right.  (Picture from original 1872 Cafe) 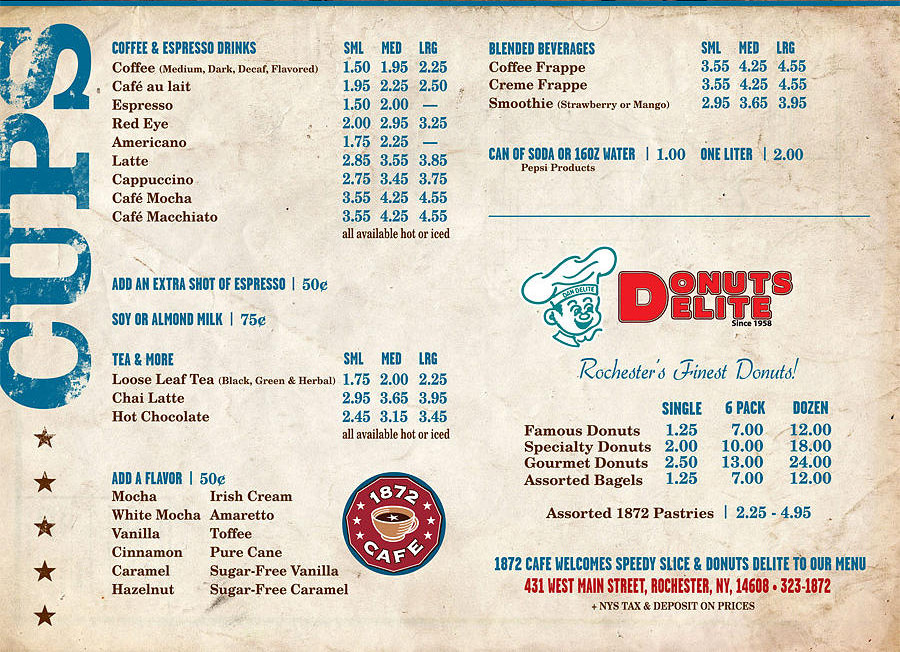 Looking at the cafe from the north west corner we see the panorama bellow with murals on the east wall on the left with names of famous women who have fought for human rights, and on the south wall in the distance on the right we see Susan B Anthony with the 19th Amendment which gave women the right to vote.  (Picture from original 1872 Cafe) 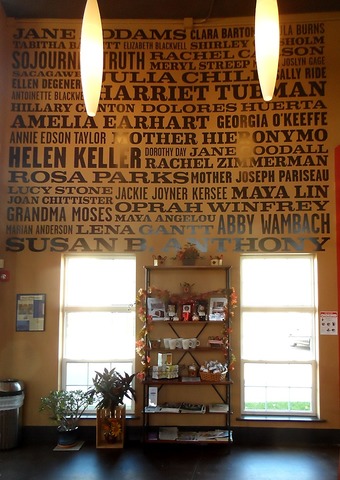 Outside in the memorial park is a plaque that commemorates the long struggle for the right of women to get the vote. John & Marian: You DO need to go back for the soup and other lunch specials. Made by Miss Betty, of Slammin' Sauce fame, everything is delicious! She's an amazing cook (of course, their baker is pretty good too. The Sweet Potato Biscuit is addictive....).

Great place for informal meetings, as well. I always see people I know there, from the neighborhood or from other organizations.

And music on Thursday evenings....

John one small correction to your beautiful posting. The café is open to 5 now.

John, thank you so much for this write up and photos. IT will encourage me to go there more often. ONe forgets !