James Farr - A story Worth Reading

Tending to a Rochester jewel

For 40 years, James Farr has been a champion of Rochester, helping the city’s parks and public market thrive by connecting the right people to the right project, all united under one vision.

The 19th Ward Community Association is looking for children to participate in their January 14th MLK Celebration. 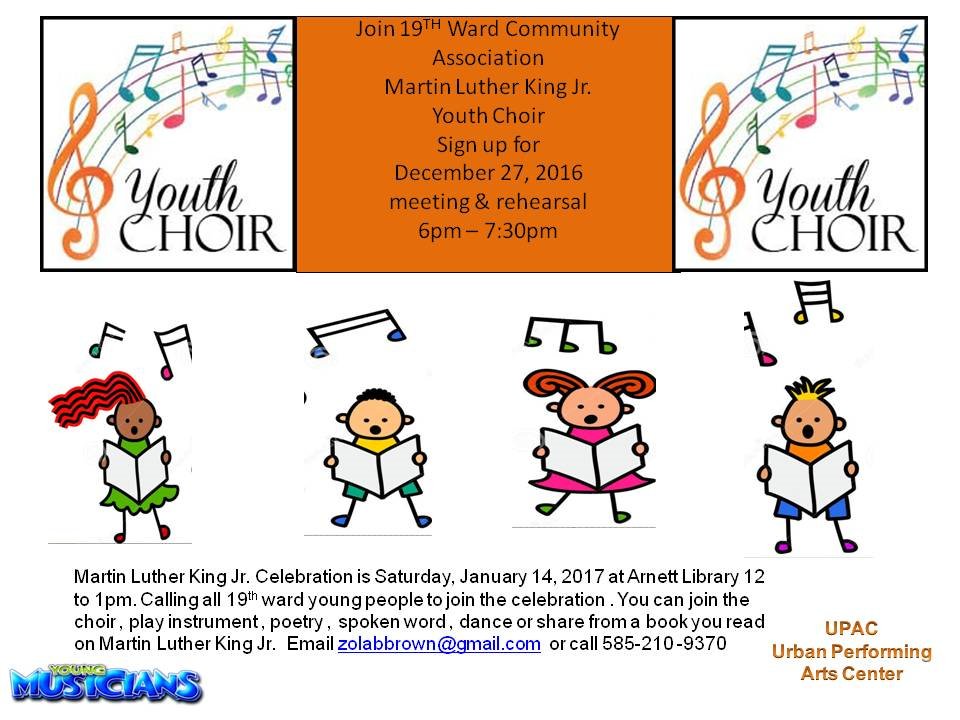 The Arnett Banch Library will be closed on Veteran's Day

The Arnett Branch Library will be closed on Friday November 11th 2016 for Veteran's Day. A big thank you goes out to all past and present members of our military. 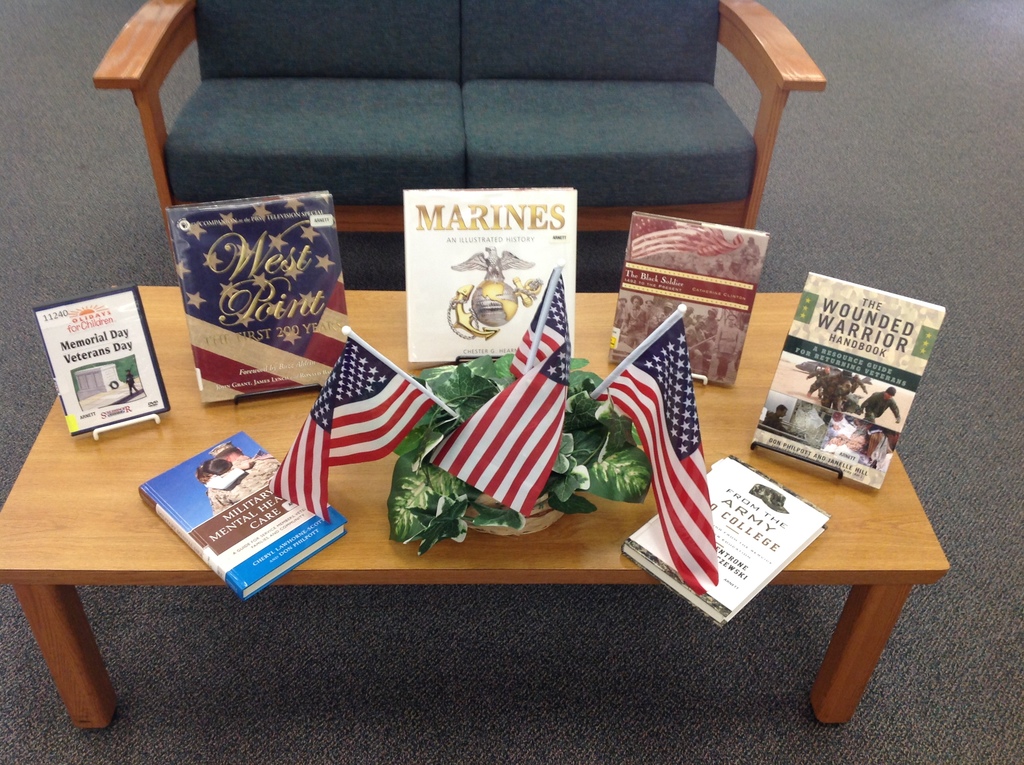 Officers Carl and Andy had nothing to report in the way of crime for our neighborhood. That is good news! They did say there have been a number of reports of cars being broken into. They recommend people hide or not leave belongings in their cars and to be sure to lock your car. Susan also reported that her rear window in her car was broken again by what appears to be some young boys in the neighborhood.
Mosa, the owner of the Buzzin Bee, reported…

Great news for teh Arnett and Phillis Wheatley Libraries!

The Arnett Branch Library and all City of Rochester libraries will be closed on Friday, October 14th for our annual staff training day. We will re-open on Saturday, October 15th at 10 am.

The Arnett Library is looking for short original Halloween poems! 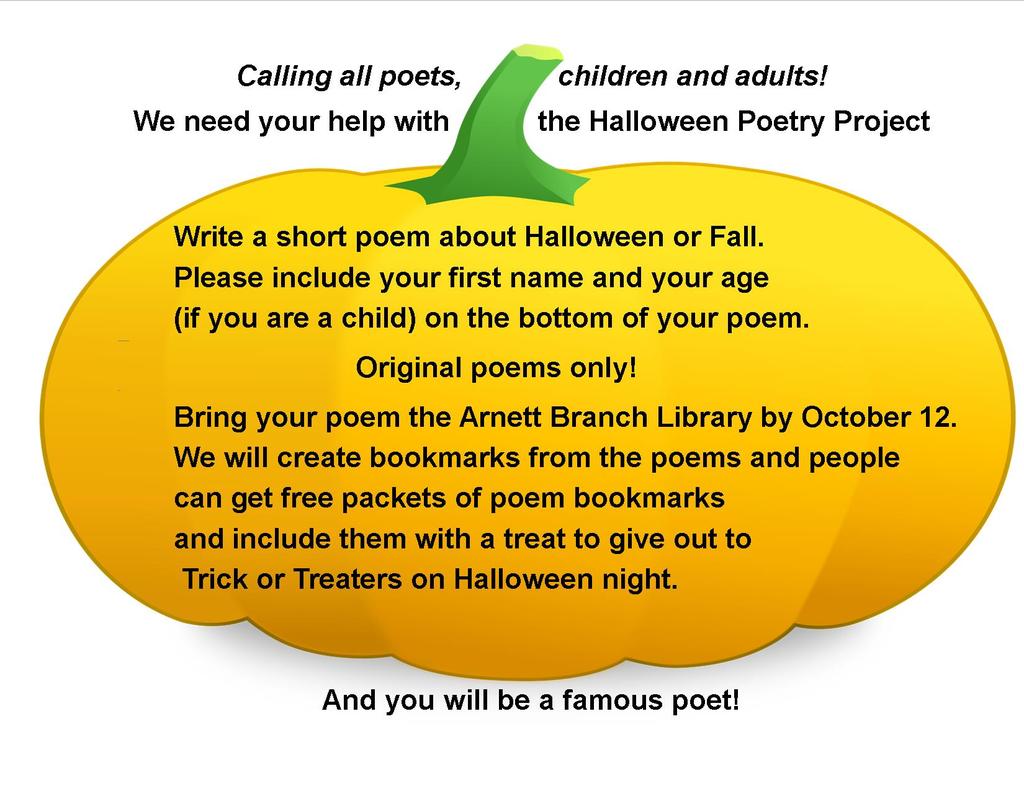 Our CP Officers, Andy and Carl, met with us and had very little to report,
always a good thing. A couple neighbors who live on Kenwood across from
#29 school reported a speeding problem on the street and asked about speed
bumps. Carl and Andy encouraged…

The Arnett Library Thanks RCCL!

A big thank you goes out to the the…

The Arnett Banch Library is open until 9:00 pm today.

City of Rochester Mayor Lovely Warren has initiated a Cool Sweep Heat Emergency for Thursday, August 4, 2016, in anticipation of temperatures that are expected to reach 90 degrees. The Arnett, Lincoln, Maplewood and Winton Branch Libraries will stay open later, until 9:00 pm, on Thursday evening, August 4, 2016 to allow people an air conditioned place to go to get relief from the heat. All other city branches and Central Library will close at their normal times. We had about 10 people attend our meeting each with concerns about the neighborhood. Officers Carl and Andy attended and did not have anything to report, however, the people who attended had concerns…

Help Save Adult Education in Rochester.

We are trying to turn our schools around by making them community schools which provide wrap-around services for students and families.  In many cases that means providing work skills to parents or older siblings who dropped out of school…

Are you interested in becoming a Rochester Public Library Americorp Volunteer? If so, visit the Arnett Branch Library between 3:00 and 5:00 pm today. A representative will be on hand to answer questions you might have.

A big thank you goes out to State Senator Michael Ranzenhofer who once again secured additional funding for the Arnett Branch Library! The NYS funds Senator Ranzenhofer has acquired for the library have been very beneficial to our patrons. The funds have been used to promote literacy, obtain educational materials, conduct children’s programming, and bring in additional technological tools for our patrons to use. These funds have helped our patrons in so many ways. For instance, just a…

We hosted Police Chief Ciminelli and Captain Tony McMullen from RPD as well as two of our beat officers and CPO's Carl Dickerson and Andy Dimaria. We took a walk in the neighborhood visiting the businesses, library, garden etc. Chief Ciminelli and the people who walked with us were able to engage in conversation about the issues in our…

Here's an opportunity  for youth aged 15-18 years to experience opportunities in the criminal justice system.

Your help is URGENTLY needed for our students -- THURSDAY DEADLINE

Time is running out to get the funding for school renovations, including that for School 16.    This renovation schedule all depends on the extended MCA getting passed now!

Thursday June 16 is the last day in this 2016 legislative session.

On June 21st, Police Chief Ciminelli will be visiting the Arnett Block Association meeting. He may take a walk around the neighborhood (which is where he grew up!) with us. Our meeting will begin at 5:30 at 350 Arnett
and weather permitting we will go for a walk from Rugby to Wellington (including Geneva's building) and back.

We will then have some light refreshments and talk with him about concerns in the neighborhood. Please
join us and…

There was some fun doings today at the Arnett Branch Library

I am part of a group that is putting together a training program for community members.  We have been brainstorming ideas and there are many possibilities from "how to become a non-profit" to "City boards and committees - what they do and how to join".  We feel that what will set our program apart is the fact that it will be truly community driven.  To that end, we are asking that as many people as possible to the following survey.