On Monday November 19 the the 19WCA held a meeting at the Arnett Library to assess the position the participants wanted the 19th Ward Community Association to take on the issue of possible school closings and consolidations in the 19th Ward. The Superintendent has had several meetings where he has presented his plans.  DeWain Feller had provided an excellent review of Dr. Vargas’ November 13 morning presentation, which he attended.  Also review the comments from DeWain Feller and Rebecca Wolf posted to the November 19 Event announcement.

In particular Superintendent Vargas recommends not renovating School 16 on Post Avenue. School 16 has been closed and students and teachers moved to Freddie Thomas on Scio Street.  Dr. Vargas also recommends closing School 10 at 353 Congress Avenue and moving the students and the Expeditionary Learning program to School 1 at Cobbs Hill in the near future.  In response to the neighborhood outcry by southwest residents demanding to keep neighborhood school in the area, Dr Vargas has suggested the option combining Schools 10, 16 and 44 into a new building to be build somewhere in the 19th Ward.

The  November 19 meeting agenda proposed by DeWain Feller and Diane Watkins was:

- Provide summary of the Facilities Modernization Plan report and superintendent's recommendation.
- State impact of closing 16, moving 10 to the #1 building, and the eventual closing of 44's building
- State the plan's option to build consolidated school for 44 and 16.
- Gather feedback on impact of 16 and 10 on neighborhood.
- Gather feedback on impact of a consolidated school.
- Provide information on RCSD community input.
- Discuss how the community can mobilize to make our case to the RCSD board.

The meeting started at 6PM and was well attended by twenty residents including a School 16 teacher and a parent with kids in the pre-K at School 10 and in School 16 at Freddie Thomas. Many of the participants have attended many other meetings this summer and fall on the School 16 issue.   There were also several past and current School 16 volunteers at the meeting.  Councilman Dana Miller was at the meeting and provided a lot of background on various alternatives that the RCSD has considered in the past.

There was a lively discussion on many issues.  Ones I recall are:

School size  -  Small schools were strongly favored.  There was general disgust with RCSD pushing big schools.  There are problems at Freddie Thomas because the building is large and classes are too spread out.  It was built as a high school.  Lockers are too tall.  Halls too wide.  Small children feel intimidated by these physical features.  Neighborhood schools should be limited to around 500 students.

Multiple schools in one building  -  Large buildings don’t work well, and Freddie Thomas is a case in point.  There are many problems with 3 schools sharing the same building.

Busing issues  -  The group strongly favored having the school primarily serve local students.  Parents who have to drive across town to get to Freddie Thomas find that detrimental to their efforts to stay involved with their children's school.  The very poor involvement in the recent evening reading event was probably related to the long commute.  Many parents choose busing for its safety and convenience since they have to leave for work themselves.

All day Pre-K and Kindergarten, early drop-off and after-school programs  -  Bringing school hours into the 21st century was strongly favored.  We generally don't have stay at home parents anymore.  Parents could drop their kids off early on their way to work and pick them up after work.  That would solve most of the need for busing.  Even parents who don't have a car could walk their child to school on their way to catching a bus.

Pre-K - 6 vs. Pre-K - 8  -  PK-6 was heavily favored.  Problems with the 8th graders at Freddie Thomas was noted.  Also one of the main costs cited for renovating School 16 for PK-8 is the need to add science labs and class rooms to accommodate for 7 and 8.  Don't add these items needed for 7 and 8.  We don't want 7 and 8.  We do want rooms added for Pre-K so we can get rid of the unsightly modular rooms currently used.

Number of students in the 19th Ward neighborhood served by 10, 16 and 44  -  We have way too many students in this feeder area for these schools to be accommodated in one mega-elementary school!  All the students from the area who currently attend RCSD schools equal 1673.  If the RCSD actually maintained and ran good neighborhood schools properly so students succeeded,  we could see 2475 students from this area flocking to good RCSD schools and forgoing being bussed to expensive parochial and charter schools.

Renovating vs. building new  -  Renovation makes more sense both in terms of time and cost.  Taking 2 years to get School 16 renovated is already too long.  School 16 at Freddie Thomas will loose its 19th Ward identity if it stays there longer than that.  Building a new school would probably take twice as long and cost more.

Parent involvement  -  It is a lot easier to get parent involvement in a small neighborhood school where they can walk to the school and easily get to know all the teachers.  Its not just the kids that can feel lost and intimidated in mega-school.

Expeditionary Learning program at School 10  -  Besides wanting to see school 10 stay open as a neighborhood school to serve the southern end of the ward, the group strongly objected to seeing the expeditionary learning program leave the area.

Diane Watkins was taking notes and took on the task of consolidating the views voiced by most people into position statements for the 19WCA.

The school board will hold a public hearing on facilities modernization on Dec 6, 6:00pm at Central Office. If you want to help publicize through facebook, here is an "event" you can share and "invite friends" on facebook to:

If you want to look at the DRAFT Master Plan you can find the map with the feeder patterns for the various schools on page 25.  The following section of that map shows the 19th Ward schools Spencer #16 and Lincoln Park 44.  Also you can find Freddie Thomas and Anderson #1: 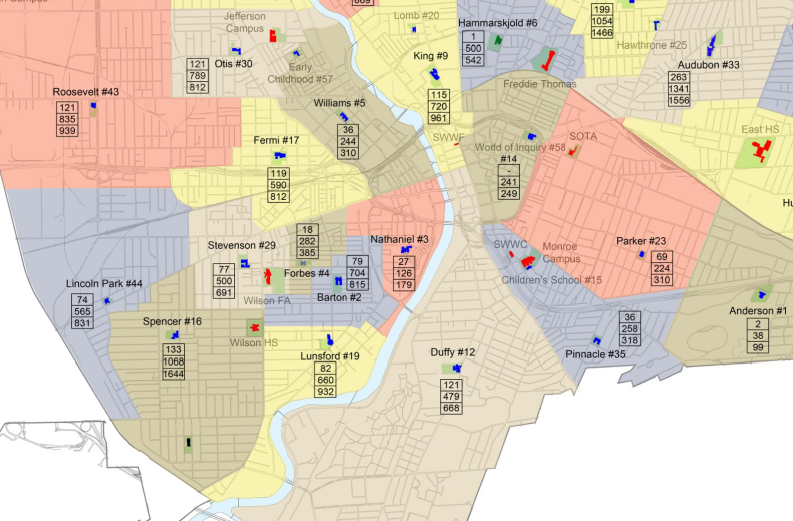 Thanks for the great summary and the great work on the School issue.  One of the most important points that we need to focus on, is what can be done to raise student learning.  Many of the issues outlined above all can directly positively impact student learning, but we as a community need to make sure our primary focus is ensuring our students/children/neighborhood residents are learning. Simply keeping the School in our neighborhood is important for a host of reasons, but having the Schools stay and our children continue to not learn and not graduate is not an acceptable option.  The more we can show that we are engaged in the community with the RCSD, and that we have a commitment to help improve our children's learning the more effective we can be. I know this is in the background of what everyone has been trying to accomplish, but we need to make sure that this point is clearly made. Student learning has to improve. The RCSD and our community has to ensure our kids are learning and graduating.