Comments:  We have been waiting three years for California Rollin' to open a sushi bar at Brooks Landing and it finally happened in April 2013.  It was a long wait but well worth it.  It's a sushi bar and a lot more.  They have an extensive breakfast menu, a burger menu for lunch and a dinner menu, home made noodles and of course all sorts of sushi... cooked, raw or vegetarian This new California Rollin' restaurant is located on the east side of Genesee Street between Subway and Boulder Coffee in the store and office complex just north of the intersection with South Plymouth and Brooks. California Rollin' occupies three of the storefronts in the building.  There is some parking on Genesee Street in front of the restaurant and a lot more in the parking-lot in back. Here we see the rear side of California Rollin' with part of the large parking lot showing. Entering through the central door in the back gets us into the main dining-room and we can see across to the front of the dining room on Genesee Street. To the left, as we walk in the back door, is a long sushi bar.  At the far end is the kitchen. In the kitchen we see Tom Beaman frying up some noodles which they make in-house. One evening Bill Nichthauser, Marian and I stopped by for some sushi and noodles.  Tom Beaman came by to chat.  We first met Tom in the mid '90's when he ran a hole-in-the -wall sushi bar on South Clinton across from the Cinema.  He offered sushi classes then and Marian took a class with Tom to learn to make sushi.

Before opening his sushi bar on South Clinton in 1994 Tom sold sushi at the public Market for two years.  In 2000 Tom closed the sushi bar and opened a California Rollin' restaurant at Village Gate.  That Restaurant is currently run by his daughter.  He next opened a California Rollin' restaurant at the Port of Rochester, 8 years ago.  The ferry fizzled but the restaurant is still cooking.  His son runs that one now, and Tom is at Brooks Landing. Here Ann, Tom's significant other, stopped by to chat.  Her daughter also works here at the restaurant. On the north side of the dining room is a seascape mural.  Behind that wall is a party room which is under construction. 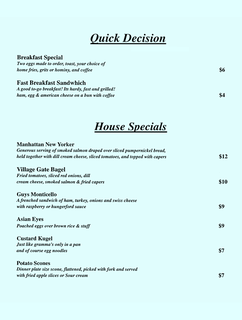 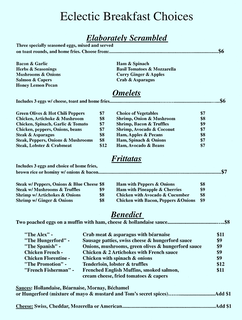 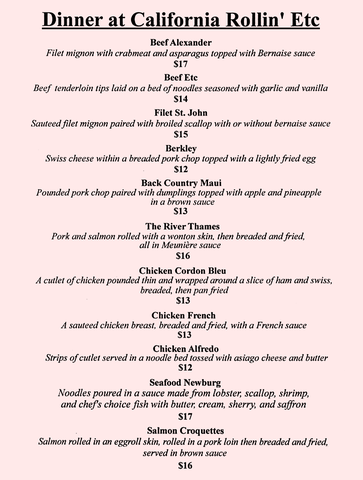 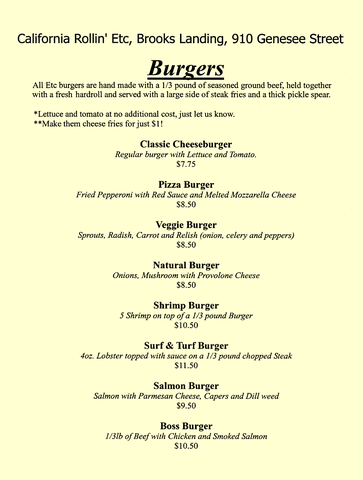 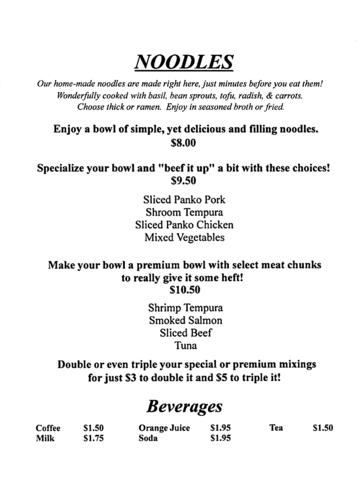 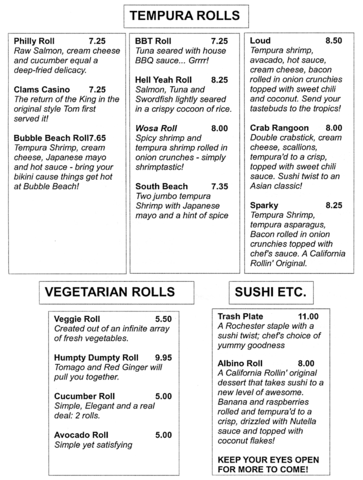 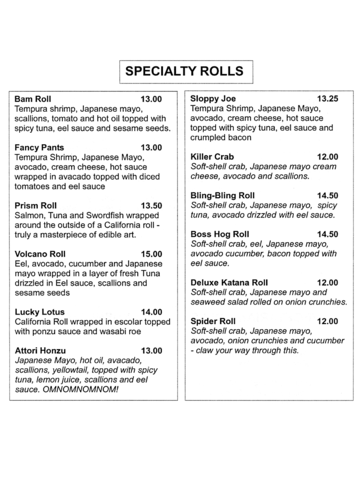 We've been in a couple of times for breakfast. The food is great. It's a very different approach to breakfast, but the standards are all there too.  I expect California Rollin will become a regular stop for my friends and me. I'm looking forward to checking out lunch and dinner.