This free, family friendly event will feature re-enactors, story tellers,
children’s games, music, walking tours & more!
Meet us at the base of Flint Street by the Genesee River to enjoy the fun! Here is a press release Just received from John Curren:

Rochester, NY - Calling all Canal enthusiasts, Civil War buffs, urban neighbors and historians - On Saturday, October 6th from 2-4 p.m. join us during Rochester’s River Romance weekend for a commemorative living history event along the Erie Canal Extension of the Genesee River. The banks of Rochester’s waterways will come alive with tales of the Underground Railroad, Civil War, and Erie Canal as we celebrate the 150th anniversary of Camp Fitz-John Porter, a Civil War training camp. This event will be an important tool in revitalizing the neighborhood surrounding the encampment and will bring local and national history alive for many residents who do not know the neighborhood's significance.

PLEX Neighborhood President Dorothy Hall is proud to welcome the Rochester Community for the event: "The celebration is important for the Plymouth-Exchange neighborhood and Rochester to educate people about the history that was once part of this southwest riverfront community."

There will be an abundance of activity throughout the afternoon, thanks to a grant from the Erie Canalway National Heritage Corridor:

Attendees will travel back to the fall of 1862 - a time of historic change in Rochester that reverberated throughout New York State and beyond. The dialogue opened through this event will break down barriers and create an open line of communication among the residents, businesses and historians of the PLEX Neighborhood. People will leave with a feeling of camaraderie, an understanding of Rochester’s involvement with national reform movements, and an appreciation for the Erie Canal. The PLEX Neighborhood will be recognized for its rich history and future potential with heritage tourism as a tool for economic redevelopment.

David Knoll, a PLEX resident and member of the Neighborhood Executive Committee is planning to volunteer the day of the event. He says, "I'm pleased that PLEX's ties to the Underground Railroad, the Civil War and Rochester's early canal and industrial history will be brought to people's attention by this event. We have one of the most beautiful views of the Genesee riverfront and downtown Rochester. The extensive wildlife near Camp Fitz-John Porter river bend make this a rich outdoor habitat in an urban setting." Join Knoll and all of the other volunteers for a great celebration of our community, rich cultural history and bright future!

Here is a Collage and an Album of pictures Mark Sweetland took at the October 6th celebration: 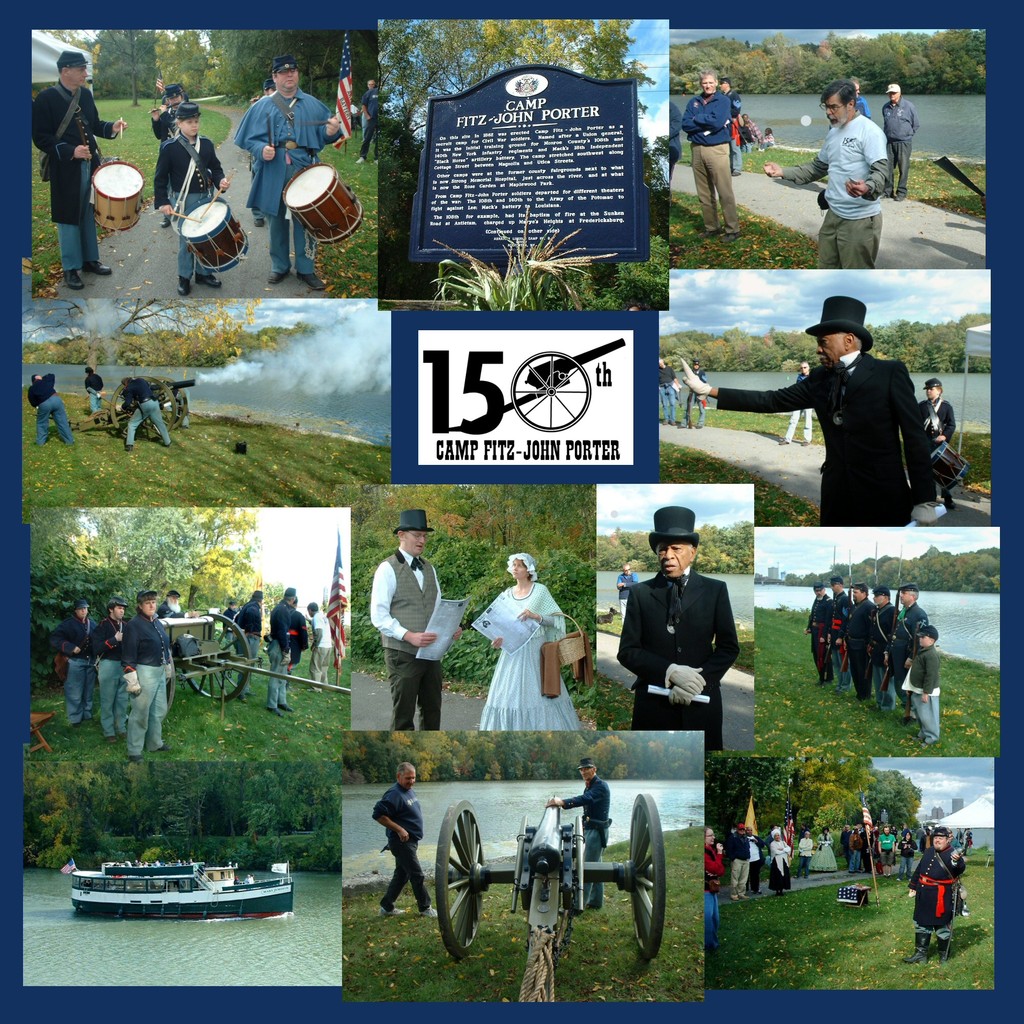 I was fortunate enough to be able to attend this premier event.  The community owes a huge thanks to John Curran for his literally years of preparation leading up to a grand enrichment to the history surrounding the camp.  Many other volunteers obviously were involved, and the reenactors did a fantastic job.  It was a very enjoyable and educational afternoon.  Thank you to everyone!  If you did not make it this year, plan to in the future! 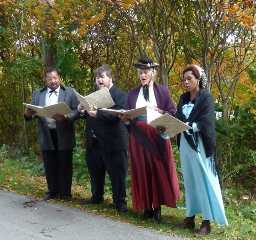 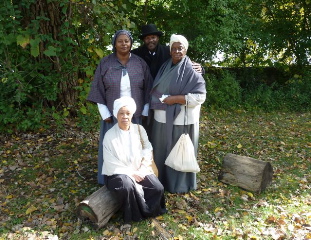 Above: P1040527 Freedom Seeker enactors from Akwaaba: The Heritage Associates
Transition: each passage in time to the reenactment sites was guided by the Excelsior Fife and Drum Corps 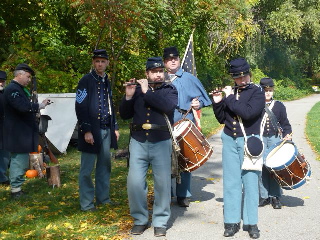 P1040513 Excelsior Fife & Drum Corps passing by encampment
PART THREE: Rochester during the early days of the Civil War
Rochester's City Historian Christine Ridarski and fellow actor react to the newspaper headlines of 1862
and reflect the sentiments of local citizens. 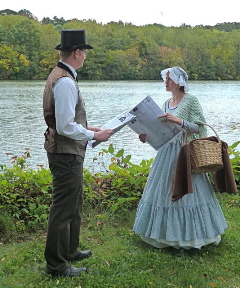 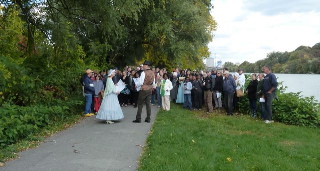 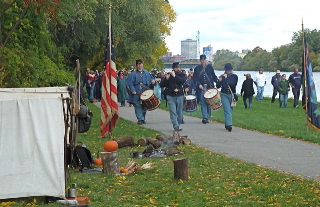 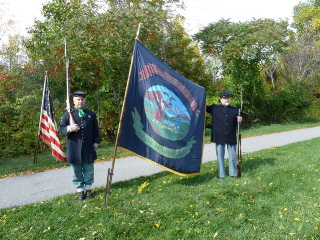 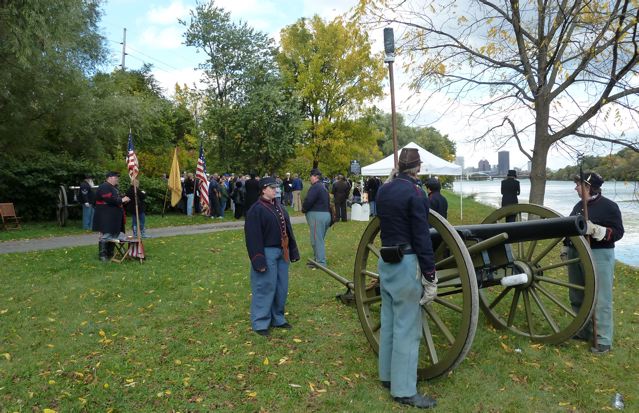 P1040558 Mayoral proclamation read by Bruce Wilder (at tent)
Conclusion: Frederick Douglass reflects on the 1862 period after troops departed camp prior to the Emancipation Proclamation 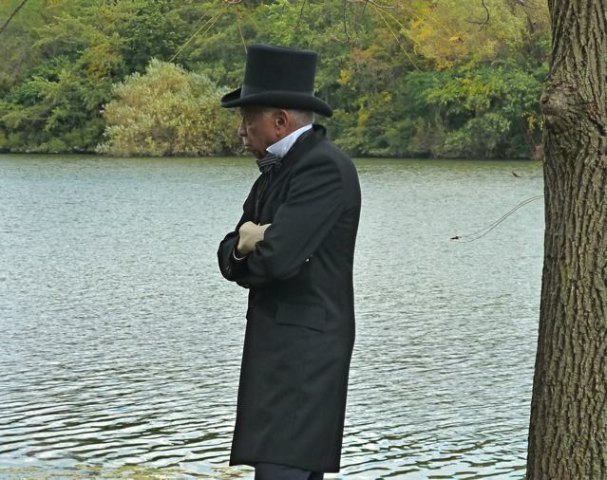 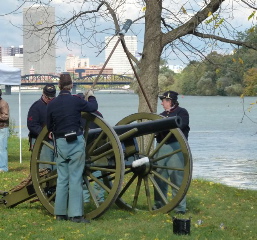 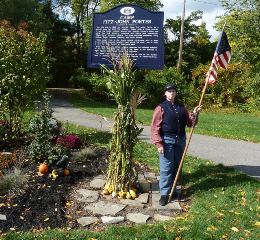 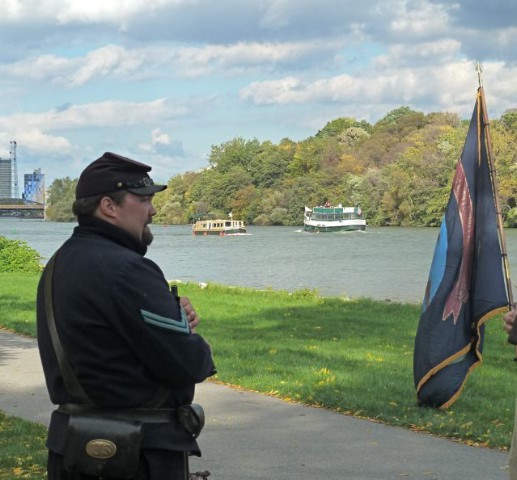