My husband and I go to The French Quarter on Arnett Blvd about twice a month. Last night we went with another couple from Marlborough Road. I can say nothing but good things about this place! As per usual, for our experience last night, The French Quarter gets an A+ on all counts (food, atmosphere, service). If you have not been to this lovely place yet, please try it. You will not regret it. They added Derby Pie to the dessert menu a little while ago. Have it warmed with some vanilla bean ice… Continue

To help my community to thrive, and prosper, be safe and become a great place to live.
Rochester New York's 19th… Continue

There seems to be a bit of trouble with folks being able to receive attachments from the 19th Ward Yahoo Group. So I am posting the Luminary Evening Backyard Movie Flyer here. You can right click and save it, or drag it to your desktop. -Shawn 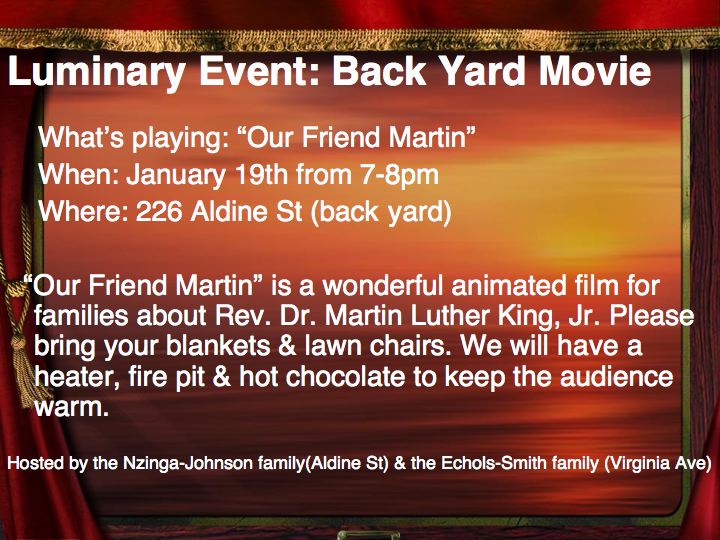 Women's Winter Tea in the neighborhood!

What: Women of all ages are invited to St. Stephen’s Annual Women’s Winter Tea on the first Sunday in February. This is an opportunity for women to come together for light refreshments, tea, sharing with others and supporting the children at 19 Ward Rochester City Schools 16 and 29 though donation of school supplies.

This event is free and women of all ages are invited to this annual event. St. Stephen’s is wheelchair… Continue

For those of you who are unable to be freezing on the Mall in D.C. among the hundreds of thousands, please join me on Inauguration Day, January 20th, from 11:00am- 1:00pm, to watch Barack Obama & Joe Biden take the oath of office.

We will be inside and warm at Boulder Coffee at Brooks Landing. A big screen will be set up for viewing this historic event and you will be able to purchase a variety of coffees, teas, soups, salads or sandwiches.

Our country and our city… Continue

Topics that will be discussed are: crime concerns, crime prevention, and police initiatives that have occurred over the last several weeks. Your Sector 4 Crime Prevention Officers will be there to hear & address your concerns.

In anticipation of low temperatures and high winds over the next several days, Mayor Robert J. Duffy is reminding residents to be aware of the dangers of severely cold conditions. The weather forecast is calling for a strong cold front to cross western New York that will bring snow, strong winds with gusts of up to 35 mph, temperatures in the single digits and wind chills below zero. The temperature is expected to remain in the single digits through Friday.

“We want to be sure that… Continue

Luminary event planning is well underway, so for those interested here are some quick updates [Repost from Yahoo Group]

First Thanks
We had a very successful weekend at Tops. Thanks to our volunteers who helped make Luminary kits and Sample kits, as well as who helped sell Luminaries. Check out Location19.ning.com for pictures. Thanks to the following volunteers some of who helped out on both days: Jackie Farrell, Shawn O'Hara, JB Manin, Barb Sullivan, Alice Carli, Sheri Tehran, Mary Ann Brody, Hannah R., Angie Burch, John Burch,… Continue

Join the 19th Ward Community Association and the fun by hosting a dinner or by attending as a guest. It is a pot luck event and the host/hostess will coordinate the event and notify guests what they can bring.

A group is forming in the 19th Ward to address the issue of feral cats in a humane and positive way. Contacts are: Alice Carli at acarli@esm.rochester.edu and Pat Buehlman at lynn_pat@msn.com

JB is the new president of the 19th Ward Community Association and a member here at Location19. This is an abridged verson of the speech he gave upon being elected. It outlines his hopes and intentions for the 19th Ward. I was lucky enough to be there for the real thing. I'm hoping this will be helpful for those who could not be there.

President Elect Obama and his View on Cities

Participants (ages 6 and over) of all martial arts forms are welcome to register by calling 428-7442 no later than January 30. The entry fee for each spectator and each participant is 5 to 10 cans of food to be donated to… Continue

I am re-posting this from the 19th Ward Yahoo Group.

Hi All,
Just letting you know about some free dance classes you may be interested in getting your children or grandchildren into. Through a collaboration between Dance for Joy, 4Winds Christian Fellowship, Greater Rochester Health Foundation, and Victory Fitness Center, free ballet, hip hop, pop-locking and breakdancing classes are being offered to youth every Saturday, beginning January 10, 2009 from… Continue

This is a posting from Dan, that he made to the 19th Ward Yahoo group. I am reposting it here.
-Shawn

We will be selling Luminary kits at Tops on West Avenue this weekend, while supplies last starting from 11- 5 on Saturday, and from 11-5 on Sunday. Hunts has Luminary Kits available as well, if you can't make it to Tops.

We will also have our hopefully last Luminary making event, Saturday at 10:30 at Tops on West Avenue. The store is allowing us to make the… Continue

For anyone who shops at Wegmans on Lyell Avenue, do stop in across the street at Martuciellos. They have great bread, wonderful pastries, excellent pizzas, including many vegetarian, and calzones. This is a true old-time Italian shop that you must try. They also have a grill for eating in, and their hamburgers on the round roll are out of this world! You must try, and you will never visit McD's again! I know this isn't in the Ward, but if you venture that way, it is truly a wonderful… Continue

With all the "buzz" about Brooks Landing and the opening of Boulder Coffee, it's only fair to remind everyone reading this blog about another "destination" place that's still developing on the North side of the community.

"The Arnett" has been open less than a year in the building formerly occupied by Creator's Hands (332-338 Arnett Blvd). It's been somewhat slow going because the whole project has been developed entirely via private donations. Nevertheless, the building now features… Continue